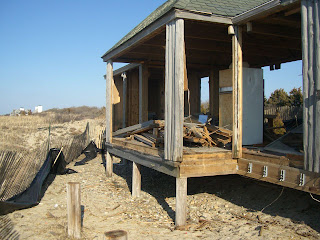 So over my life I have been asked more times than I can count if it's worth becoming a filmmaker. I would say that more and more each day I've come to the conclusion to just, RUN AWAY! Be a burger flipper, a car salesmen anything but a filmmaker. I've been in the industry for almost 18 years working in various positions and have learned a great deal and when I decided to finally reach for that brass ring (being a director)which is what I've always wanted since I was 12 years old. I would never have thought it would that I had to take so much punishment to try and get a film off the ground. My first two films I was a gun for hire and those films sold and are either circling the DVD bin at your local Wallmart and Blockbuster or are in distribution hell.

I have always been one to follow the beat of a different drum and it has been nothing but hell. Case in point, I've been working on getting "Sever" which is one of many films that I have written over the years for the big screen and it has always met with delays from one aspect to another. I understand shit happens, but now I'm beginning to wonder if I'm cursed and if it's all worth it anymore.

This is an on going dilema I've been having with this film particularly over the last year with it being the second location that went away, so I re-wrote the script and then trying to get the money to do this film, Christ I'd rather have all my teeth pulled with no novicane than to have to hunt for the almighty dollar to make a film. It's the worst part about movie making and basically takes all your energy and fun out of it.

We're still trying to get finances together for this film which basically at this point I can make it for the craft service budget that they spent on the original Texas Chainsaw Massacre. I know this may be a bitch fest, but to any of you out there trying to make independent films, you'll understand my struggle.

We're hoping by some dumb luck we can start shooting in April, we have everything in place but the dough.

Posted by Darkside Films at Tuesday, March 13, 2007 Links to this post

Add to My Profile | More Videos
Posted by Darkside Films at Thursday, March 08, 2007 Links to this post 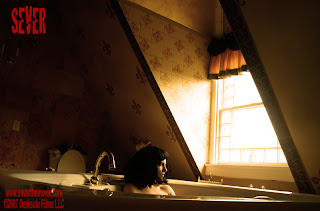 Victoria Campbell who starred in our first film "Ancient Evil 2" plays Charlotte, a woman on the verge of a nervous breakdown and who is unkowingly harboring a serial killer in her families cottage.

This is the first still from our new trailer that will premiere on our site www.severthemovie.com starting on March 10th!

Posted by Darkside Films at Tuesday, March 06, 2007 Links to this post