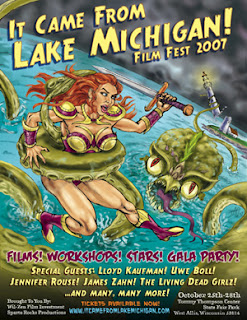 Director D.W. Kann from Darkside Films and Composer Mars from Dead House Music will be presenting the feature film "Prison of the Psychotic Damned" at a MIDNIGHT showing Saturday Oct 27th in Wisconsin at the "It Came From Lake Michigan" Film Festival which starts October 26th thru October 28th.

There will be a q & a after the screening and both Mr. Kann and Mars will be on hand for signings all weekend.

Posted by Darkside Films at Thursday, October 18, 2007 Links to this post