I was recently interviewed in G.A.S.P. Magazine which is a new horror mag located in Massachusetts for "Prison of the Psychotic Damned." Below is a smaller version of the article which you can read online or purchase it at www.gaspmagazine.net.
Posted by Darkside Films at Friday, December 21, 2007 Links to this post

It Came From Lake Michigan 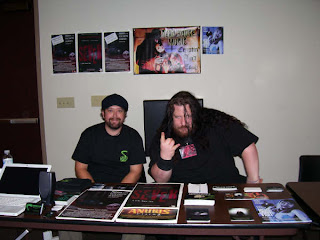 Well it's taken me a month, but here are some pics with Mars and myself at the www.itcamefromlakemichigan.com film festival held in late October. I will also be heading back to the States for two weeks during Christmas for a break, but will be heading back to England at the beginning of January to start cutting "Six Bend Trap" from Ironopolis Films. They will likely release the film in the UK early Spring...stay tuned.
Posted by Darkside Films at Monday, December 03, 2007 Links to this post