When Herzog meets Monty Python in CAVE of FORGOTTEN DREAMS? 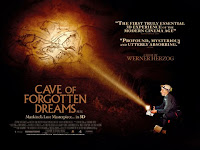 There is no doubt in my mind that Werner Herzog is the consummate filmmaker. Being a geeked out fan of his for years I have not loved everything he has made but am never disappointed when you follow along in his journeys.

CAVE of FORGOTTEN DREAMS fits into this category. I missed seeing it in the theater in 3D. For me it's so far the best way to use the technology that isn't synthetically made to manipulate the audience. I'm not a fan of 3D, I think it's a desperate ploy from the Hollywood corporate entity to keep people coming to theaters to watch mediocre/poor dreck in order to pay overpriced tickets sales covering inflated and unnecessary budgets. But when I heard Herzog was going to use 3D to bring you inside the Chauvet cave in Souther France I was very excited. It's what 3D is meant to be used for. 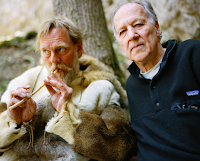 I bought a 3D Blu-ray copy for my brother on Christmas and last night we watched it on his 3D flat screen. It's one of the most incredible pieces of cinema you'll see. The camera passes over 28000-32000 year old cave images that are drawn on different layers of rock, giving them a three dimensional look. Unless you visit the cave which is now shut down permanently you will never be able to experience the magnitude of this discovery.

That being said, I wish Herzog had gone more with the KOYAANISQATSI motif than rolling out his cavalcade of Monty Python guests that ate up screen time. For one example, the bear skinned flute man showing up. He's not particularly relevant and came across as a goof. I get that Herzog manipulates his docs as much as his narratives. But I feel he may be becoming a characterization of his former self by pontificating even more outlandish comments than usual on what you're seeing as well as loaded questions to his interviewees. I found myself laughing and rolling my eye's during what is supposed to be pertinent information.
This approach toed the line in GRIZZLY MAN, but less is more here and the gold ticket to this movie is the cave drawings, let them speak to us rather than having Herzog put his own 2¢.
That being said, this movie should ONLY be viewed in 3D, otherwise you'll miss the whole reason why he wanted to use this technology and the impact that it makes.

Posted by Darkside Films at Sunday, January 29, 2012 Links to this post

Night of the Comet needed some Rutger Hauer 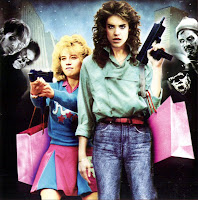 But! They had the cute and sexy cheerleader Kelli Maroney. I thought I had seen this movie when I was a kid, I didn't remember it at all, though scenes look familiar. It may have been one of those late night cable wake and pass out viewings.

I haven't watched an "actual" 80's horror/sci-fi movie in a long time. This one warmed my cockles. Though I was disappointed in the lack of comet zombies. They had such a fun and zany premise that it begged for it. Especially when you throw in two chics that LIKE GUNS! And they know how to use them! While dressing up one in a cheerleader outfit as she lights up a caddy with her Mac 10- I mean come on, give a fan boy what he wants! The mall sequence alone could have been extended, it was a damn silly and creepy scene.

The film does drag in spots as the sisters figure out what they're doing
or who they want to do.


But if you're looking for what everyone now is
trying to re-invent as so called "80's" looking style
movies, just go back and watch an actual one.
In comparison they're more misses than hits on the
new breed of these knock-offs. I'll stay with the
classics. Though this would make a killer re-boot!
Posted by Darkside Films at Saturday, January 28, 2012 Links to this post

Experiencing Scott's LEGEND again after all these years.

Re-visiting movies can sometimes be a great experience or one that you wish you kept as an nostalgic memory. I've always had a warm spot for LEGEND. First being a Ridley Scott film, second having Rob Bottin doing the make-up which to this day is still phenomenal and thirdly is the closest to a live action 40's Disney animated film come to life.

The only version I had ever watched was the 90 min theatrical with the Tangerine Dream score that was fine but never really fit exactly. So dusting off my disc, I popped in the almost 2 hr director's cut with the original Goldsmith score. What an awesome surprise! It takes a little to get used too, especially if you've seen the theatrical a few times. But quickly this version takes a much darker tone and there is less Tom Cruise from what I remember being before that actually makes his performance better and more of an ensemble which is what it was meant to be.

Shot in 1982 it took three years for this puppy to finally be released after being re-cut multiple times to the score being changed because they were gearing it to a younger crowd. I feel this is the version to see. There is more of every cool thing that you wanted from the original viewing. Between the Sea Hag's exchange with Jack to Darkness to Lilly and Jack's relationship to the black dress dancing along side the demon baby. The print is incredible as you can finally see the depths of the craftsmanship that went into the sets. My only beef still to this day and I wish Scott had taken it out was several modern lines of dialogue from the Goblins that takes you out of the film.

This may not be his biggest critical achievement such as THE DUELLISTS, ALIEN or BLADE RUNNER. But it's still an achievement none the less and being only his fourth film at the time gives Scott another genre he pioneered that people would imitate for years to come.
Posted by Darkside Films at Saturday, January 28, 2012 Links to this post